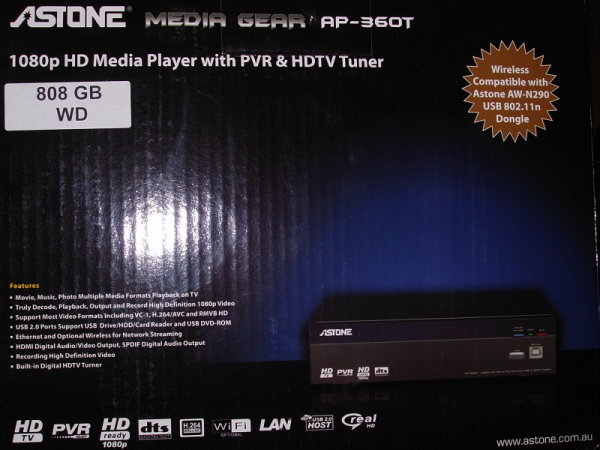 supplied by Catch of the Day. The unit came with an 808 gigabyte hard disk installed.

The specifications are impressive. Unfortunately, they don't tell the whole story.

The first issue I noticed is the feeble tuner. Of nine I've used, this is the least sensitive.

Next come problems with the installed hard disk. The disk itself seems to be fine, but the unit doesn't reliably recognise it. Sometimes it works and sometimes I get a message that no hard disk is detected or an icon similar to what the user manual calls the “Ban sign”:

but with a line drawing of a hard drive in place of the hand.

Scheduled recordings rarely work. The unit turns on, but doesn't record. While monitoring the output, I've noticed the “Ban sign” flash up before recording fails. Manual recording also rarely works. For example, I started it recording then repeatedly pressed the record button until the on-screen message showed two hours. The recording light stayed on for that length of time, but it recorded less than 12 minutes.

Networking is poor. The hard drive installed in the AP-360T is not visible to other nodes on my wired home network. Attempting to copy from that hard drive to a share on the network via the Astone's interface throws up a “Read only” message. The folders in question are read/write accessible to other nodes, including a Beyonwiz PVR. There's no way to set the workgroup name, which might be part of the problem (for Windows systems, at least).

On the plus side, the Astone can read files from some network shares and plays some that are beyond the Beyonwiz.

25 November 2009 12:20 pm.
Requested support via http://www.astone.com.au/index.php?feedback=yes, referring to this page.

I downloaded the update that afternoon. It's beta software. I hope they know what they're doing.

27 November 2009 midday.
Following directions from the support forum, I began the update. For several minutes the screen showed a progress bar and a message not to turn off the power. At some point, the screen went blank. An hour later, it was still blank. Switching to composite video at least got me a display to work with.

Switching from HDMI Auto to 720p@50Hz got HDMI working. On all 1080 settings, HDMI worked only sporadically. Other equipment in my setup exhibits no such issues.

After a brief recording, which seemed satisfactory, I scheduled one of just under three hours duration for later tonight.

Networking now seems to work as expected. The AP-360T can see all nodes on my home network and its hard drive is visible from other nodes. I successfully copied files between the AP-360T's hard drive and another node, via both the Astone's interface and Windows Explorer.

HDMI has stopped working altogether. By swapping cables around, I eliminated all but the Astone as the problem. Composite video gives me a display, but that's of little use for HD video.

For comparison purposes, I set up both the AP-360T and my Beyonwiz DP-P1 to record the same program. To determine signal quality, I watched that same program live.

Signal quality proved good. The Beyonwiz had no difficulty recording. The Astone failed. Attempting to check for a recording file brought up a message: “No HDD detected”.

Though the form offers only Exchange or Store Credit as options, I requested a refund and gave my bank account details.

My first attempt, using Firefox, didn't seem to work. I repeated the exercise in Internet Explorer and was rewarded with an RA number. Single email subsequently received, quoting the RA number given in Internet Explorer, evincing that the php form doesn't work in Firefox.

03 December 2009.
I returned the unit by registered post and informed Catch of the Day via their web form. They conformed receipt of my advice by email.

The refund mentioned includes the cost of delivery. I'm impressed.